Tesla cars is one of the top green tech companies that are revolutionizing the world, and specifically the automotive industry with their cutting-edge technology and eco-friendly features. In this blog, we will explore the inner workings of those cars. How do Tesla cars work?

In this comprehensive guide I will cover topics such as the battery, motor, autopilot, the app, and other amazing features that make Tesla cars stand out from the competition. So, if you’ve ever wondered how Tesla cars work and want to learn more, this is the right post for you! 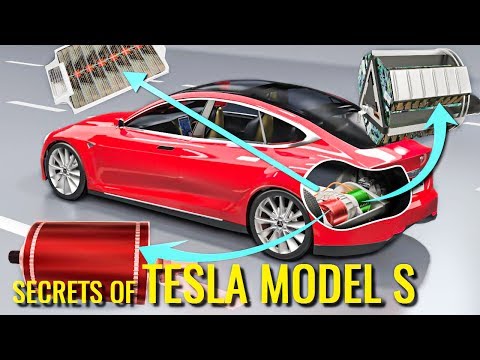 Tesla cars are powered by electricity stored in the battery pack, which is made up of lithium-ion cells. These small cells are connected in a combination of series and parallel to produce the power required to run the car.

The batteries can release pawer in DC (direct current) mode, however, the motor of a Tesla needs AC (alternate current) to work, so the power is converted to AC by an inverter before to be fed to the motor.

This means that the motor spinning speed can be controlled by simply changing the frequency of the alternating current given as an input, which can easily be achieved electronically through an inverter and power controller.

The Benefits of Electric Motors

Electric motors are becoming increasingly popular in modern vehicles due to their many benefits. Compared to conventional combustion engines, electric motors offer a range of benefits that make them ideal for powering a vehicle.

Tesla’s Autopilot: how does it work?

The Autopilot system is one of the most advanced features of Tesla cars. This system allows the vehicle to steer itself in a lane, detect traffic and slow down or speed up accordingly, and even change lanes and exit freeways without the driver having to touch the steering wheel.

This feature is incredibly convenient, as it allows drivers to be hands-free while driving. For an additional $3,000, drivers can upgrade to Enhanced Autopilot, which allows for almost fully autonomous driving. But how does Tesla’s autopilot work?

Tesla’s Autopilot system is an impressive piece of engineering that has revolutionized the driving experience. This system uses a combination of cameras, a front-facing radar, and twelve ultrasound dots to provide a 360-degree view of its surrounding environment and allow the car to detect potential hazards up to 160 meters away.

All of this data is organized and processed by a powerful full self-driving chip, consisting of two Samsung silicon chips with 6 billion transistors each, capable of 26 trillion operations per second. The car also has the ability to learn from data harvested across the entire global fleet of Teslas.

Smart Summon, which can be activated with a button on the app, is only recommended for use on private driveways. Despite its sophistication, Autopilot is not yet fully autonomous and drivers are still legally required to keep their hands on the wheel at all times.

In case you are wondering, here’s a video of what a Tesla with the latest autopilot update is able to do! 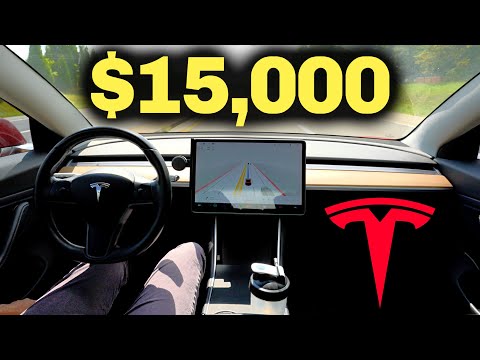 Issues with the Tesla Autopilot

Though Tesla’s Autopilot has been praised for its safety features, some are suspicious of the company’s so-called shadow mode, which essentially pretends to be an autonomous vehicle and reports back to HQ when its planned driving deviates from that of the real driver.

Tragic accidents involving Autopilot, such as the passing of 38-year-old Apple employee Walter Huang and 50-year-old Jeremy Behran Banner, have set back progress by months, if not years.

Supporters of Tesla’s Autopilot argue that self-driving Teslas are on the whole better than human drivers, but the car is not yet ready for full autonomy.

It is unclear whether regulators will lighten up and grant more autonomy to Tesla vehicles, or if the car will ever truly deserve the name Autopilot.

Despite this, it is likely that Elon Musk‘s brainchild will eventually get us where we’re going, and it is an ingenious mixture of smart sensors, lightning fast AI and crowdsourced machine learning.

How does the Tesla’s transmission work?

This is because electric motors can generate high levels of torque as soon as it starts spinning, while instead, an internal combustion engine (ICE) doesn’t have this capability. This is why usually electric cars have a transmission with only one gear.

Tesla cars are equipped with a single-speed fixed-gear transmission that provides direct power from the motor to the wheels. This eliminates the need for traditional gears, resulting in a more efficient drive. The lack of a transmission also reduces the amount of energy lost due to friction, resulting in higher efficiency.

Tesla cars are also equipped with regenerative braking. This technology uses the electric motor to slow the car down, and it converts the kinetic energy into electricity which is used to recharge the batteries. This helps to extend the car’s range and reduces the amount of energy used by the car. 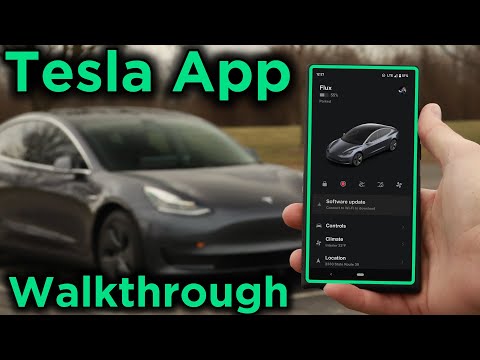 Tesla’s mobile app is an essential tool for any Tesla car owner. It allows drivers to monitor and control their car from anywhere.

The app makes it easy to check the status of the battery, range, and charge level, as well as to adjust the climate control system, giving them the ability to heat or cool their cars before they even get inside. How cool is that!

The app also allows users to monitor their driving habits and get access to maintenance reminders. This, coupled with a drive safe and save insurance may help you to have an even more eco friendly driving style.

Tesla cars also feature an app-based keyless entry system. This allows drivers to unlock and start their cars with their mobile phones, eliminating the need for a key fob or physical key.

Tesla owners can also use the app to check the location of their car, allowing them to quickly locate it if it is ever misplaced.

The app also allows users to access the Tesla Supercharger network, which allows them to charge their cars quickly and conveniently.

Other than the mobile app, all the functionalities of a Tesla can also be accessed thanks to its integrated touchscreen.

The touchscreen in Tesla cars is the control center for nearly every function of the vehicle.

This touchscreen is incredibly intuitive, and it allows drivers to visualize the recordings from the car’s cameras, to draw on the screen, view charging station locations, and even play some video games!

It also displays a graphics display of the traffic around the vehicle, providing an additional safety measure. This touchscreen is incredibly useful, as it allows drivers to control nearly every aspect of their cars from the comfort of their seats.

How Tesla Cars Connect to the Internet

Tesla cars are equipped with an internet connection that allows them to be constantly updated with the latest software. This connection also helps the cars to access various online services, such as navigation, streaming music, and more.

The internet connection of Tesla cars is achieved through a combination of cellular networks and Wi-Fi connections. By using the cellular connection, the car is able to access the internet from any location. The Wi-Fi connection is used for more specific purposes such as software updates, streaming media, and more.

Tesla cars also have the ability to access the internet while they are parked.

How Tesla Cars Are Charged?

Tesla cars are equipped with an onboard charger that allows the car to be plugged into any standard wall outlet for charging. This process will take about 12 hours for a full charge, depending on the model and battery size.

Tesla also offers more powerful charging options for those who want to charge their cars more quickly. The company offers a range of charging options, from home wall connectors to public charging stations.

Home wall connectors are designed for residential use and are easy to install. They come in different power levels, allowing users to choose the best option for their needs.

Public charging stations, on the other hand, offer higher charging speeds and are conveniently located in various places, such as supermarkets, shopping malls, and other public spaces.

Now you may be asking yourselves, why don’t electric cars charge themselves using solar energy while driving? That’s a good question, and whyle Tesla cvars are partially charging themselves thanks to regenerative breaking, they still don’t have solar panels on their roof. Just click the link to learn why!

The Tesla Supercharging Network is made up of thousands of charging stations located throughout the world. Each of these charging stations is capable of delivering up to 150 kW of power, allowing Tesla vehicles to charge in as little as 15 minutes.

The Supercharging Network has been an integral part of Tesla’s success in the electric vehicle market and has been instrumental in helping Tesla owners stay on the road longer.

Tesla Cars and the Future of Automotive Technology

Tesla cars have revolutionized the automotive industry with their cutting-edge technology and innovative design. The Tesla Model 3 is a perfect example of this, with its advanced features that make it stand out from the competition.

Not only does it have 18-inch alloy wheels and plastic caps for improved aerodynamics and reduced power consumption.

It also has a 15-inch touchscreen that controls nearly every aspect of the vehicle, air conditioning system with a massive vent spanning the dash, convenient center console for phone charging, and a phenomenal backup camera. Additionally, it has Autopilot and Enhanced Autopilot, making it easier to steer and control the car.

The future of automotive technology looks incredibly promising. With Tesla cars, we are able to experience a level of convenience and safety that was previously unimaginable!

Now you know everything you need to know about how do Tesla cars work and the amazing technology powering those electric cars.

Tesla cars are a revolutionary way to drive. Not only do they offer superior performance, they are also incredibly efficient and environmentally friendly. The combination of zero emissions and cutting-edge technology make Tesla cars a great choice for any environmentally aware person looking to reduce their carbon footprint and enjoy a great driving experience.

Not only Tesla cars use and take advantage of the benefits of extremely advanced digital transformation tech, but also their Gigafactories are a role model example of smart manufacturing in industry 4.0.

Tesla cars are the future of driving, and they are only getting better. With advancements in battery technology, charging infrastructure, and autonomous driving, Tesla cars are becoming increasingly accessible and reliable.

When considering buying a new car, you should definitely consider Tesla as well as hybrid cars and normal gas cars. Then evaluate their pros and cons carefully to be sure to get the right type of car for you. I wrote 2 other guides that can help you in your decision:

If you can afford it, with Tesla cars, you can go anywhere you want to go, without having to worry about the environment or your wallet.